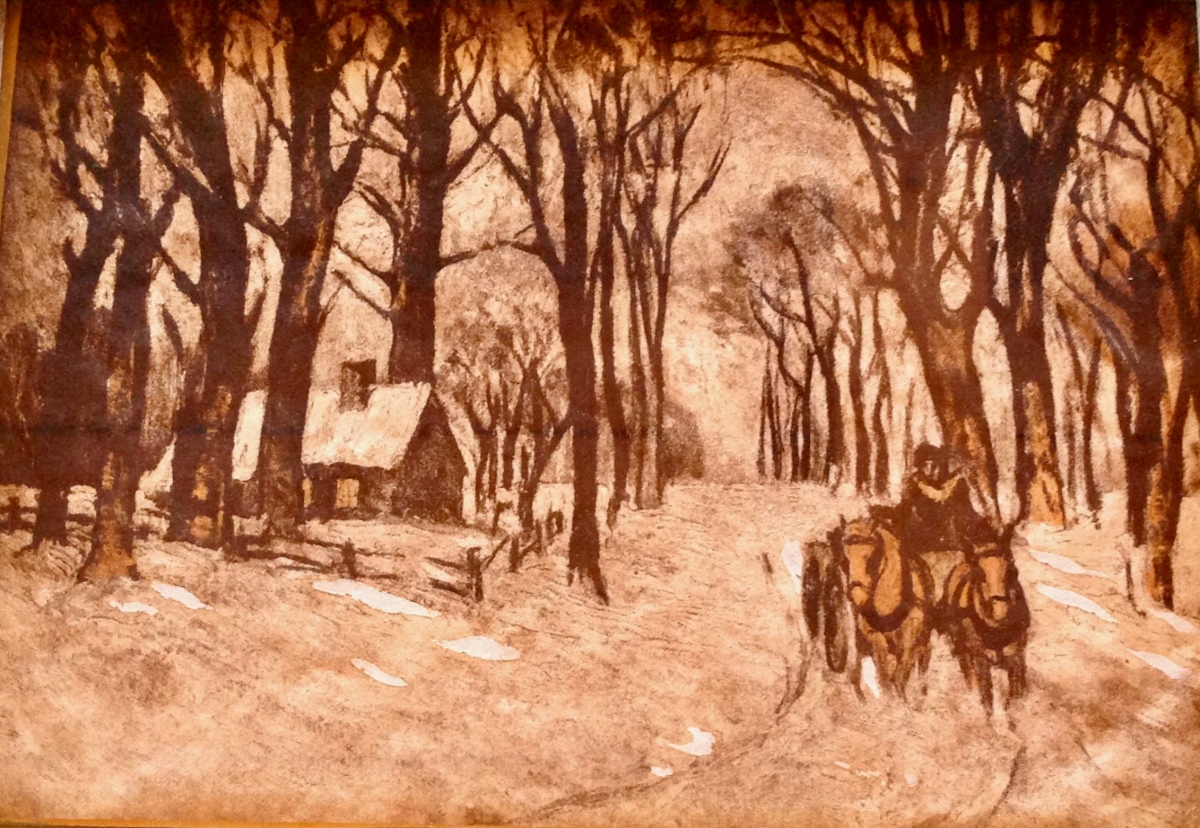 The following short story was inspired by the hauntingly beautiful winter scene pictured. I found this small, 4 x 6, unsigned, pen and ink on paper at a barn sale in Wisconsin many years ago. It remains one of my very favorite pieces.

Katie keeps the meager fire burning in the small cottage at the edge of the woods, watching her mother twist and turn. Hearing her quietly moan.

Looking around the cabin, she’s desperate for something to do – some way to be useful. But all’s been done in the last two days since the contractions began. So all there is to do is be there when her mother calls, and wait.

Motionless at the kitchen window, she watches the rising sun slowly define the intricate silhouettes of the barren trees behind the barn.

What will the new light bring?

But she’s exhausted and the light is dim. Wiping away the frost and the fog with the apron she’s been wringing in her small hands, Katie watches her father through the kitchen window as he prepares the wagon to fetch the midwife from town. Hitching the horses in the pale light of the lantern, she marvels at his ease and compassion. Patting each of theirs rumps and their necks, and rubbing their broad, long noses, he gently rouses his team to their unexpected task.

Clouds of breath rise from their nostrils and disappear into the cold and still of the mid-winter’s morning as he moves swiftly around the massive beasts, laying the harness as he has hunderds of times before. With bridles slung over each shoulder, he warms both metal bits beneath his thick coat before putting it in their mouths; and for his daily thoughtfulness, each horse lowers his high, heavy head toward him when he holds out their bridle.

Until another moan comes from behind and she’s at the side of the bed before the contraction ends and her mom can see again. Gently wiping her brow with the apron, she squeezes tight when her mother grabs hold of her hand and clutches it to her chest.

Smiling again when her mother turns toward her.

Opening her eyes to her daughter, no pain can blur the struggle she sees in her young heart and old hands. She wants to hold her, to hug her tight and tell her everything will be well, but another bolt of pain seizes her thoughts and intents, and she releases her daughter’s hand, clutching the bedsheets instead.

Twice the dawn has come and gone and still the little one is all turned around and stubborn to leave. But I’m stubborn too, she repeats as she squeezes. And the midwife will be here soon.

Pacing the room, Katie hears a horse whinny and looks through the glass and the ice to see the foggy figure of her father climb to his seat, lift his collar against the cold, and call to his team. Running out the door to the edge of the yard, she watches her father disappear into the expanding light.

The horses’ hooves and wagon wheels crush the thin, icy layer that’s formed on top of yesterday’s heavy, wet snowfall, and the sounds of the departing wagon cut through the silence, the winter and the morning, like a tear in the universe.

“Click-click,” he urges his horses, while urging himself to peace; to steady his breathing and steady their pace.

All will be fine. She’s a strong woman. Far stronger than me.

“And what would she say of this mood beyond hope?” he calls to his team, resting his eyes on the road up ahead, as the dim and grey of the dawning, winter day becomes brighter and whiter with the strengthening light.