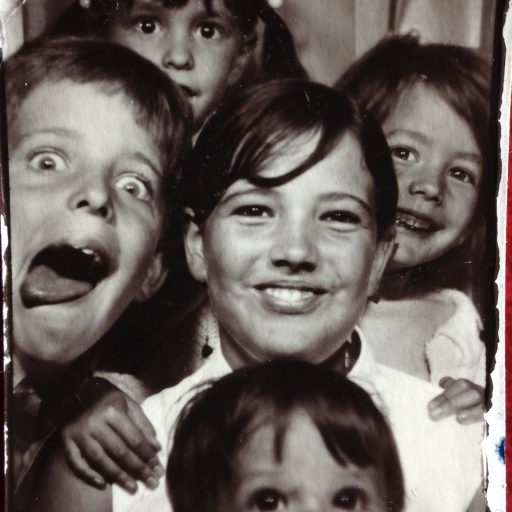 At the end of the front hall is a door leading to steps – sixteen in all – winding one-eighty to the upstairs hall; a four-paneled portal to the children’s domain, keeping first floor parents separate.

It’s also vital for a game we play, set into motion by two things:  a large box arriving, and Mom and Dad leaving.

As soon as headlights disappear down the driveway, we begin grabbing every cushion and pillow from every sofa, chair and bedroom; and meeting at the top of the winding staircase, toss one after another over the railing until we’ve created a tottering stack of softness, penned in by the aforementioned door.

Flanked by wild smiles at the top of the stairs, Mark, in a Magic Marker race car (we secretly souped up earlier), is pushed down the steep, carpet-less track. But the dreaded hairpin turn half-way down, quickly ends the Cardboard Box Jockey’s run, just inches from where the ocean of cushions begins.

When the race car gets totaled and tossed aside, there’s still the pile of pillows.

To make sure it’s safe.

And when he climbs from the pile unscathed, we each take turns taking the plunge, until failing to recognize Jim’s bored, half-crazed eyes, things take a turn and Mark suddenly finds himself dangling over the railing, as a Swanson’s T.V. Dinner threatens to reappear through fearless, but foolish, upside-down taunts.

Jim slightly loosens his grip around the youngest’s ankles, and smiles like the devil.

But we know he’ll never let go… not intentionally.

Changing Malibu Barbie’s outfit for her big date with Ken, I hear Jim making his way along the hallway, moving toward the curving, front staircase next to my bedroom.

As he passes the door and starts down the stairs, I’m suddenly, impulsively, spurred to action. (My future line of defense: Lack of Premeditation.)

Quietly reaching around the corner to the light switch at the top of the staircase, I-

Down Jim goes like an angry sack of potatoes.

“GOD DAMN IT! Who turned off the lights?!”

Tittering nervously, I creep away in the dark, feeling both revenged after years of big brother torment, and remorseful for my utter lack of foresight.

My ad-libbed evildoing results in a broken, big toe. And Jim’s thirst for my blood.

History soon has the gall to repeat itself when a few days later, there in my room – with no thoughts of wrongdoing, whatsoever – I hear familiar footsteps (now favoring one foot) heading down those cursed stairs.

Then something wicked this way come.

I tip-toe to the door, again, and quietly reach for the switch.

With no parents home for refuge, I run for my life. Ducking and covering. Trying to avoid any siblings who might give me away. Which means ALL of them.

Finally hiding in the dark of the sauna, desperate for the familiar footsteps of a returning adult, I can hear Jim hobble and rage, screaming my name and vowing retaliation.

But un-consoling are the cedar walls surrounding me.

Guessing the worst is over (or a parent has returned) when the house goes quiet, I open the door to the outside world.

“Even if he’s still mad,” I reason aloud and unconvincingly, “he’ll never catch me with a broken toe.”

“Two broken toes!” growls a voice from behind the door.

With my bedroom right next door.

I know the comings and goings of all stairwell travelers.

I hear when Chris is breaking curfew

and Jim is looking for trouble;

when Mia is sleepwalking,

and Mark is shuffling downstairs for comfort.

gently rise into our bedrooms and into our dreams;

while Dad’s call for Inspection

bursts up the stairwell and down the hall,

sending bodies scattering in all directions.

I listen for Mom and Dad’s footsteps below.

For Dad to toss his keys into the pewter bowl.

I listen for the sound of the staircase door opening.

to give good night kisses all the way down the hall.