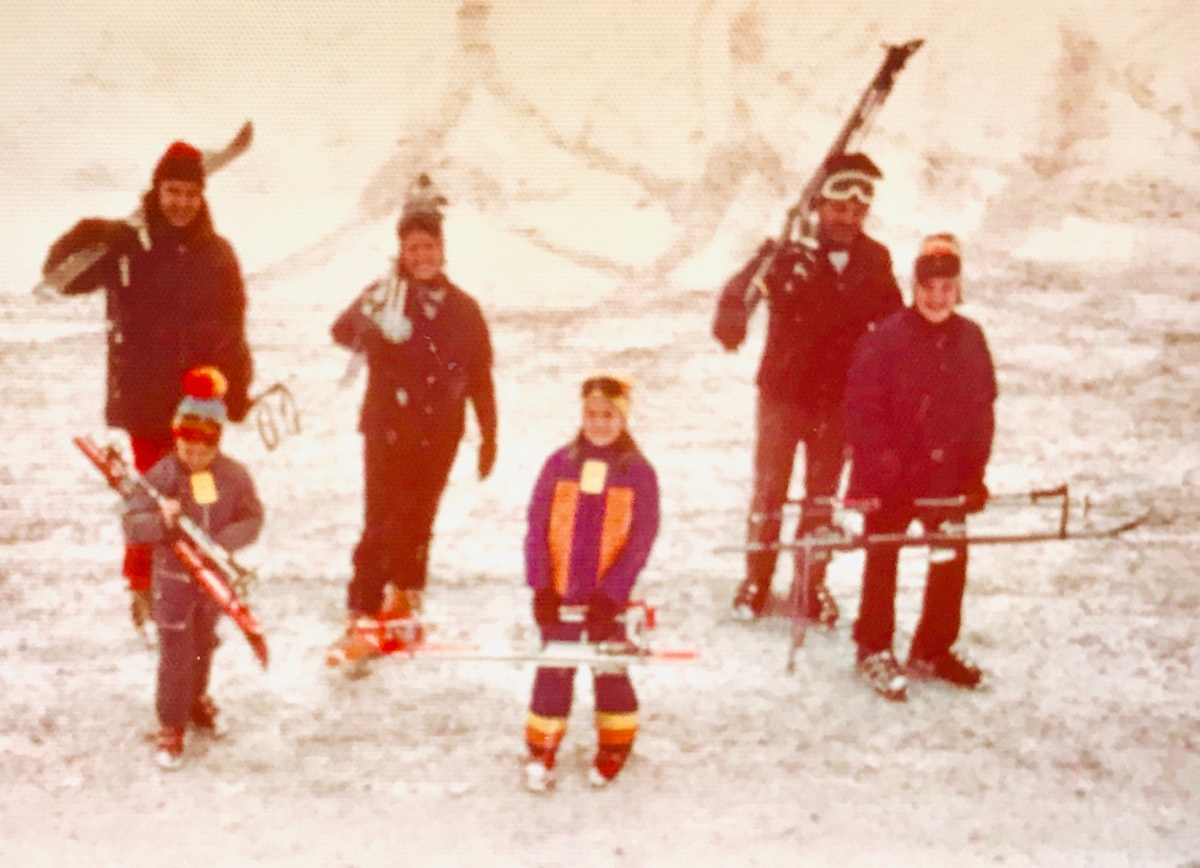 In the early 1970s, Mom and Dad take us on a Christmas ski holiday to Park City, Utah.

as we climb the mountain in the rental sedan.

Looking for that wonderful white fluff.

But all we see is brown and green stuff.

The more snow you’ll see, the higher we climb.”

We have little reason to doubt him.

Quietly miserable, swabbing her bruised, stitched and swollen gums, and wanting no part of the fight over first-night bedroom rights, Chris waits for things to settle, then drags a blanket, grabs a pillow, and collapses in tears on the sofa til morning.

Raising myself from a battle lost and the living room floor, I’m at the ready with my couch-envy unpleasantries as soon as I open my eyes. But my intentions are met by Chris’s very pale face pressed against her blood-soaked pillow and all that comes out is “MOOOOOOOOOOOOM!”

Insensitive commentary and contorting faces are nudged toward the kitchen, before she has a chance to think differently upon seeing her reflection.

“Ka-tonk, ka-tonk” echo the steps of our rigid boots off the neighboring condominiums and mountainside. Though the surrounding snow looks old and icy, the skies are cloudy and promising and our spirits are high. Even Chris (who barely has enough blood to raise color in her cheeks) manages to perk up.

She and I board the first ski lift together, admiring the birds’ eye view of our alpine surroundings, paying little mind to the conditions below until we reach the top of the run, where we see attendants shoveling meager remnants of old snow onto the chairlift landing.

Clearly groggy from blood loss, Chris readies herself by putting her hand firmly on my left leg, then pushing off my thigh, shakily slides forward at the designated mark, leaving me involuntarily planted in the seat and quickly heading toward the 180 degree turn that will take me back down the mountain. With lightning reaction, one of the attendants yanks my arm and whisks me off the chair and onto the ramp they’ve been trying to repack with snow.

“Scraaaaaaaaaap-p-pe,” go my brand-new skis over the exposed gravel, and down I go, into a pile of hard, dirty, grey ice.

Lifted from the ground by the fellow who launched me there, humiliated and bruised, I grimace and sidestep over to Chris, who smiles weakly, revealing her black and blue gums and blood-stained teeth.

I want to kill her, but her oral surgeon seems to be doing the job for me.

of father and eldest son unsuccessfully attempting to level and stand a 10 foot pine without the aid of a saw – or a tree stand.

“LEAVE IT!”, Dad ROARs. (Had there been any snow on the mountain, we’d likely have just been buried by it.)

This startles Jim, who lets go of the tree, which crashes to the ground, mere inches from Dad, who suddenly decides to take a long, walk, where he’ll cool off, giving Mom time to devise a tree-standing plan, leaning but triumphant.

We all stare wildly at the television, newly kaput.

Jim and Dad fiddle futilely with its back.

Mom turns on the radio hoping to lighten the mood.

But the only thing she can find is static.

No reason to go on, really.

If Walls Could Talk

“Eeeek!!,” comes a scream from the downstairs bathroom.

With absolutely nothing else to occupy the hours, everyone runs to where Mia is standing, wrapped in a towel, dripping with soap.

“Who’s using the hot water?” she cries out, shampoo stinging her eyes.

But all who can be blamed stand before her.

“Mom, are you running the dishwasher?”

“I would be IF it was working!” she snaps, finally showing signs of strain.

With the news of no hot water for days, the cursed family lets out a collective sigh – as if the condo sprung a leak.

Which, at this point, seems entirely possible.

From Here On Out

After three hours in the car, searching unsuccessfully for snowier resorts, the mood has dipped so low it’s nearly impossible to think of what else could go wrong.

It isn’t long before we have the answer.

Pulling up to the condo, the rental car begins to sputter and choke, and then… it dies.

We remain still and silent in the back seat, exchanging frightened side glances, waiting for the explosion.

Dad and Mom sit staring straight ahead through the frosty front windshield.

Then, as if a sweet, tropical breeze blew in through the now dormant air vents, they turn to one another… and start laughing.

At the suggestion of Charades, family members begin frantically looking for ways out – fiddling with the dead TV and staticky radio, pretending to read, or to die, suddenly.

And even though total indifference finally sits itself down for the game, it isn’t long before everyone – including Dad (who rarely participates in such things) is wise-cracking and happily taking their turn.

Teammates are syncing like well-oiled, mind-reading machines. Pantomimes are performed with dexterity and artistry. Guesses are made with certainty.

I begin by acting out the hand-cranked camera.

I tip one finger to my nose, then swiftly thrust forward a number of fingers.

“Six words!” she fires in succession.

I tap my nose and squeal with delight. My brain is reeling.

Catching a glimpse of Dad out of the corner of my eye, his infamous intolerance and abhorrence for the family cats suddenly flashes before me.

Meeting Mia’s eyes, I drop kick an invisible object, then point to Dad.

“Cat on a Hot Tin Roof!” she screams, leaping from her seat to join me in a victory jig around the living room.

Stunned by the veiled clue and breakneck victory, everyone is laughing.

Everyone but Dad. He just looks confused.

No hot water or dishwasher.

No music or phone.

No one restless for change.

in a world we,shape and shift

I have been writing for as long as I could hold a pencil in hand and would not feel complete without it. And I actually made a meager living at it (and as an editor) for 25 years. I worked for newspapers and magazines, in graphic arts and advertising, and wrote several local history books. But I have also taught English in Japan, been a Nanny in Italy, worked in and for museums, and was an Airbnb Superhost for four years. After moving to Arizona with my family in 2010, I completed a series of different writing projects, including two books of creative non-fiction: Just West of the Midwest: a comedy (Based on journals I kept during my two years as an English teacher in rural Japan.) Within Close Range: short stories of an American Childhood (Short stories and poems about growing up as the middle of five children in suburban Chicago.) I've also written children's stories and continue to write short fiction, but have recently found my voice in poetry. And when I'm not moved to write, or research a large piece of fiction I'm formulating, I focus much of my energies on running my Etsy shop, ChannelingNonna (channelingnonnavintage.com), where I sell vintage clothing, folk art, books, and a trove of other items I have found and continue to bring home from thrift stores, barn sales, yard sales, estate sales, etc., whereever I roam. This blog, however, is where my greatest passion comes alive. I am also a mother of two wonderful girls, Eva (23) and Sophia (21) and wife to one wonderful husband, Kurt. View all posts by Anne Celano Frohna