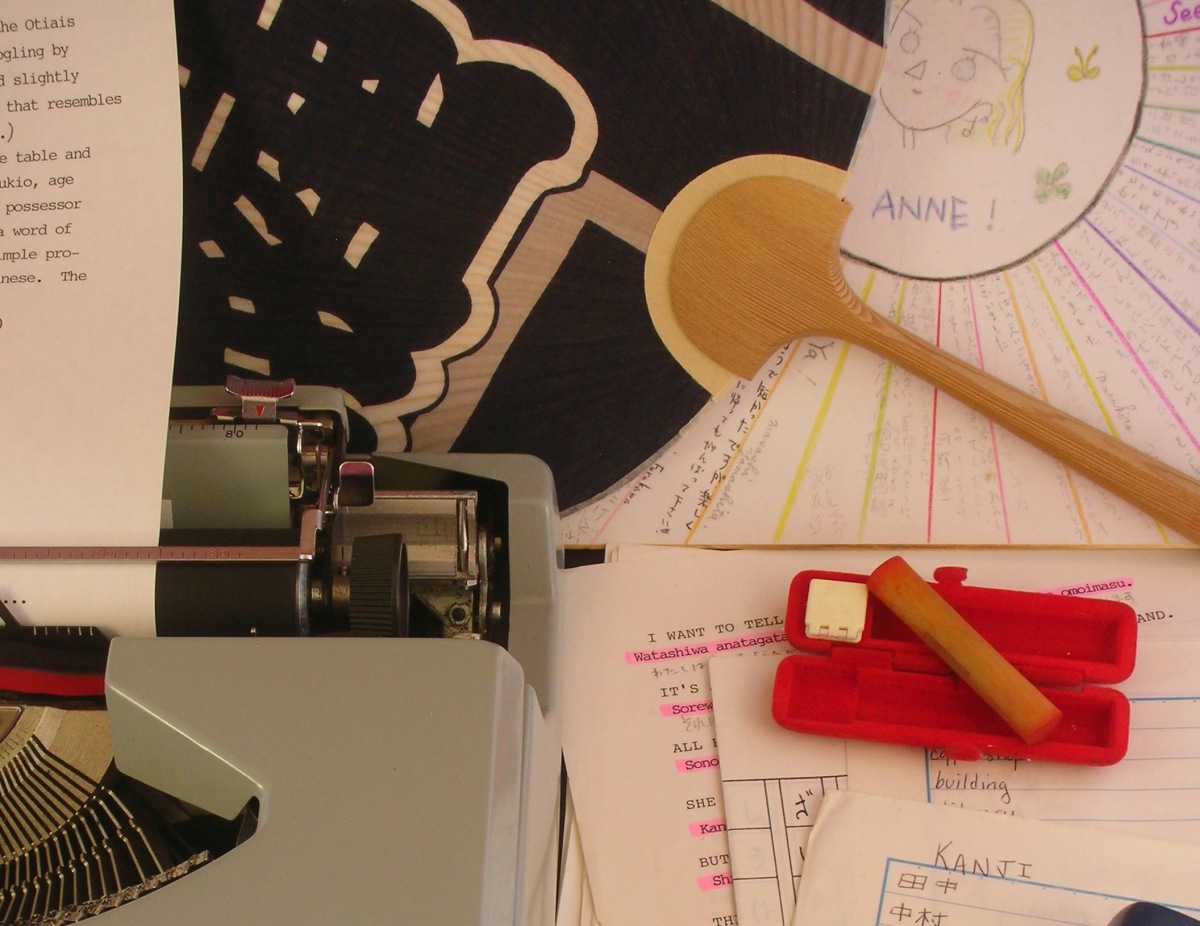 Last Saturday, I was up bright and early and on a 7:30 a.m. train to Miyazaki. Not for shopping, sightseeing, or even a lovely breakfast, mind you, but to pick up trash along the Oyodo River. It all started a few weeks back when my friend, Vance, asked some of us if we wanted to do some rafting.

“Sure,” I said eagerly. I hadn’t been rafting since my summers in Colorado and I was itching to do it again. I signed my name on the dotted line, paid my fee, and only then did Vance offer more details. It seems that for the past 15 years, a rafting race called the Ikada Kudari has been run on the Oyodo River from Takaoka to Miyazaki. But it’s not just any ol’ race. Contestants are also required to build their rafts from scratch.

Not exactly the whitewater excursion I had in mind.

Good thing I adore Vance. He’s such a great guy – with his big Beagle eyes and huge grin – funny as hell, animated as all get out, and speaks Japanese with such proficiency that I love to just stand back and watch him blow most Japanese away.

Vance and I were our team’s only representatives on the day of the river clean-up (a warning sign, in hindsight), but we happily joined a crowd of about 500 people strolling along the grassy banks picking up an odd piece of refuse here and there. While talking with people along the way, I learned that there would be a total of 90 rafts and about 1,000 people involved in the race and that our team would be the first gaijin – sorry, “foreign” team ever to participate.

After the clean up, Vance and I headed out of Miyazaki to where the raft and most of our other team members were. There would be a total of nine people, including two Japanese girls, Miho (who arrived at the site with her boyfriend in tow wearing a lime green track suit, criticized the raft and, two minutes later, departed) and Miki, whom we would not meet until the day of the event.

When I initially caught sight of our raft through my sweat-soaked eyes (it was about 100 degrees F and 5,000,000% humidity) I knew we had a long, long, long day ahead of us.

Earlier that week, we had come up with a team name of “The Sirens” named for the mythical mermaids who lured sailors to their deaths with their songs. Looking at our sad, half-built, wholly unsound vessel, however, I was now confident that the only thing we would be tempting was our own fate.

The contraption being built was supposed to stay afloat for the 6 hour journey down river, but all I saw was a lopsided platform that couldn’t possibly stay afloat for 6 minutes – let alone hold a team of nine. But as the Japanese say, “Ganbatte!” (Do your best!) and we did just that. By the end of the day, and after many revisions, the original design (which was about as balanced as a drunk on a roller-coaster) was modified and we were almost completely confident the platform could, quite possibly, stay somewhat afloat.

We also came up with an additional environmentally-themed slogan which matched both our ecological concerns and our sentiments at day’s end:  “We Wish We Were Well.” We even created a large banner to bring aboard which was the image of the Earth – cracked and bandaged.

The next weekend, we made our final revisions, delivered it to the riverside, hoisted our team flag and joined in the opening night festivities. Once again, without the assistance of our Japanese teammates. The only reason we can now figure why they wanted to be a part of this event was to have the novelty of saying they were on the gaijin, sorry, “foreign” team.

At the opening event that night, I ran into several of the fellows from my town hall’s computer department, including Sunada. Apparently, they’ve been in the race for the past 3 years and boasted that they would certainly beat us the next day.

That evening, we ate and drank to our hearts – and stomachs’ – content. We danced and sang, agreed to do a couple of television interviews and, at the end of the night, there was a raffle. Believe it or not, for the very first time in my life, I won a prize, a really nice CD/Radio/Cassette player!

As for the next day’s race… when we first dropped it into the water, I found myself almost as embarrassed as the time in 8th grade when Blake Heron (on behalf of Tom Peterson, 8’11”) broke up with me (at the time about 3’7″) at the beach in front of all my friends. Blake said that Tom said that it was because I told him to “shut up,” but I knew it was because everyone thought we were a joke.

Our Japanese team members finally showed up minutes before we were to disembark and I have to admit that Miki (the gal I had not previously met) turned out to be quite lively and fun. Miho (once again wearing that damn lime green sweat suit), however, was about as bearable as the black plague.

Despite how mortified I felt hopping onto our sad, little receptacle, I have to admit I was soon having a great time – thanks to Audra and especially, Vance, who (clad in his khakis, white button-up, white gloves, sunglasses and green fedora) looked a sight lounging and laughing as if our raft was a yacht in the Hamptons. And so we began our journey, slowly floating down the river on this warm, overcast day, passing and being passed by rafts of all shapes and sizes.

Some of the rafts were truly spectacular. Decorated from bow to stern. Complete with gadgets and devices. Ranging in design from the sublime to the ridiculous. One team built a raft which resembled the Red Baron’s bi-plane, complete with spinning propeller. Another was built from the frame of an actual automobile. There was a giant Buddah, a monstrous devil, an Egyptian barge, an enormous Japanese folk dancer whose arms and legs moved. And my favorite, a massive black beetle whose legs, wings and antenna all moved, propelled by a bicycle in the belly of the insect.All in all, the rafts were awesome and we were soon comforted by the fact that at least four other rafts that we saw were as ugly as ours. This gave us strength to hold our heads high.

At least high enough to down a few beers.

Our raft got off to a good start and soon showed every sign that it might actually stay above water for the entire journey. As we made our way down river, we exchanged drinks, jokes and food with other rafts. (Side note: I unwittingly ate tongue for the third time since being in Japan. If it happens again, I plan to cut out my own.) Except for a few sand bank hazards and a couple of very timid areas of whitewater, the Oyodo is a mild river, which meant much of the time we took turns paddling just to keep moving.

At least most of us did.

And Cherri only pretended to paddle.

Despite a few mutinous moments, we did manage to act as a team. We were also surprised that we were not only passing many of the entrants, but witnessed raft after raft break apart or run ashore while ours not only stayed together, but stayed the course. Many of those who ran ashore simply couldn’t be bothered to turn their attention from their grills to find the right current to move down river. It was clear that everyone was simply there to have fun and enjoy the day. And not a single raft followed any of the event rules – no alcohol, no swimming, no feet dangling.

In the end, The Sirens actually made great time, finishing 6th out of one hundred teams. We blew Sunada and the other computer boys out of the water. One of their two rafts sank, while the other arrived an hour after us. Our team didn’t stay for the closing ceremonies because we had to get our raft moved to an abandoned lot and completely disassembled before heading home and to work the following day.

Miho conveniently got seasick and disappeared before the disassembly of the raft began.

I hope she threw up all over her lime green sweat suit.

My love to all and here’s hoping that your summer days are mild and breezy, instead of so hot and sticky that one day, as you innocently walk down the street, you fall prey to someone’s discarded chewing gum and in the same fashion as the prehistoric tar pits, you begin to trap small animals, children, city refuse and other nasty, little life forms on the bottom of your shoe until you, yourself, are merely one more victim who has fallen prey to the Juicy Fruit nightmare that haunts us all.