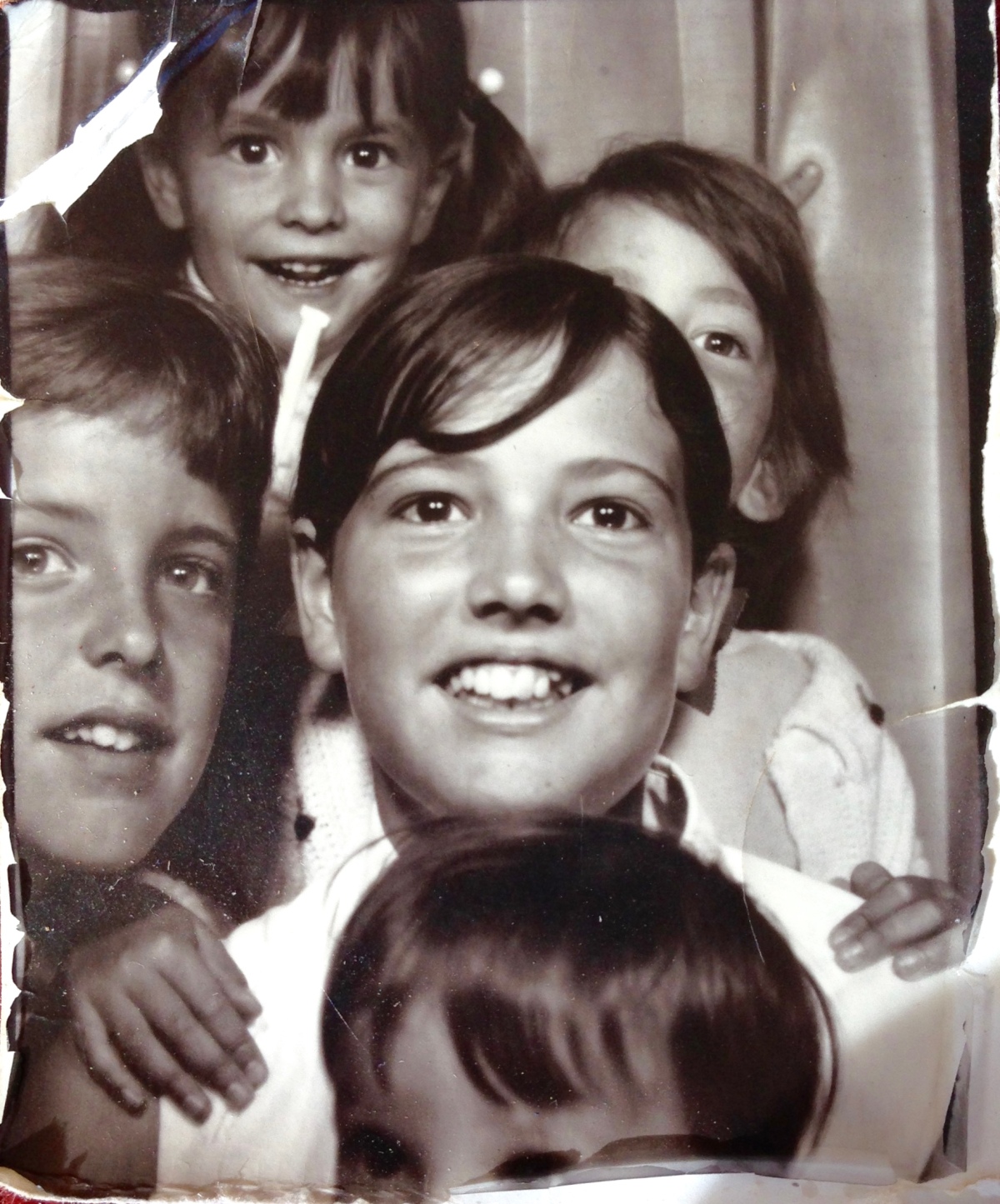 Bundled past our noses to keep the icy lake winds from turning our ambitions, seeking refuge from the great indoors of winter, we head outside. No destination, just going forward, down the well-plowed road, gritty from salt.

Climbing the piles, pushed in great, icy, grey chunks to the side of the road, we reach the unmarred snow blanketing the golf course and “CRUNCH”, break the layer of ice formed overnight on top of the thick, powdery snow.

Shattering the winter scene’s muffled silence with each noisy footstep.

The drifts almost swallow Mia and I, who are trying our darnedest to keep up with Jim and Kim, our cousin from Springfield – a tall, burly fellow, several years our senior, with a lilting voice, cherubic face and gentle soul; our very reason for forming this unlikely quartet which trudges on, until we come upon the frozen creek that crosses the course.

We follow this to two small ponds, where climbing down its banks, Jim slips and skids along the edges of the ice, while Mia and I head to a large culvert under an old, planked bridge dividing the ponds. Kim following, ever vigilant over his temporary wards.

Scrambling over the bridge to other side of the culvert, Mia shouts for me through the cold and dark, and I answer back, across the frozen water, from the opposite end. Clear is Kim’s silhouette hovering behind Mia, like a new mother bear,

and our small voices sounding strong against the corrugated steel.

Mia takes off one of her mittens and slides it through the giant, metal tube, along the leafy ice, right into my hands. I toss it back… and back it comes again. We do this several times, but Mia’s enthusiasm fades with each toss and I find myself stretching a little further into the dark. Her final, fainthearted throw lands the tiny, snow-caked mitten smack dab in the center of the culvert.

“Whoops,” is all she has to say, having already sacrificed the mitten to the creek.

Hoping to avoid a lecture from Mom about another lost mitten, I begin a slow crawl toward the center, inching closer and closer to the wooly stray, hearing only my breathing, tinny and low, and Kim’s voice whispering, “Be careful, Annie.”

As I reach out to grab the mitten, all sounds cease, except one.

The ice below me pops and cracks and gives way, and suddenly I sink, face first, into the water. Swallowing it and gasping for air, I open my shocked eyes to the muddy scene at the mucky bottom of the culvert a foot below.

Seconds tick forever, until someone takes hold of the hood of my bright pink jacket and yanks me from the icy water.

Before I even have a chance to process what’s happened, Kim grabs me from Jim’s arms and starts to run toward home. Shock soon gives way to tears, as shivering wracks my small, drenched body.

Kim’s worried mumblings make me cling ever harder, as he plows through the snow drifts toward home.

Hand in hand with Mia, Jim follows quickly. Like a hero, silently.

Pressed against Kim’s heaving chest, I hear only his heartbeat and hurried footsteps fumble along the fairway and onto the road, never slowing until I’m safe within the warmth of Mom’s arms.

Where he apologizes profusely for something that wasn’t his fault.

I have been writing for as long as I could hold a pencil in hand and would not feel complete without it. And I actually made a meager living at it (and as an editor) for 25 years. I worked for newspapers and magazines, in graphic arts and advertising, and wrote several local history books. But I have also taught English in Japan, been a Nanny in Italy, worked in and for museums, and was an Airbnb Superhost for four years. After moving to Arizona with my family in 2010, I completed a series of different writing projects, including two books of creative non-fiction: Just West of the Midwest: a comedy (Based on journals I kept during my two years as an English teacher in rural Japan.) Within Close Range: short stories of an American Childhood (Short stories and poems about growing up as the middle of five children in suburban Chicago.) I've also written children's stories and continue to write short fiction, but have recently found my voice in poetry. And when I'm not moved to write, or research a large piece of fiction I'm formulating, I focus much of my energies on running my Etsy shop, ChannelingNonna (channelingnonnavintage.com), where I sell vintage clothing, folk art, books, and a trove of other items I have found and continue to bring home from thrift stores, barn sales, yard sales, estate sales, etc., whereever I roam. This blog, however, is where my greatest passion comes alive. Thus, this blog, where I post my creative non-fiction, short stories, a couple of illustrated children's stories and a comedy I wrote about two years I spent teaching English in rural Japan (NOT a story for a child.). I am also a mother of two wonderful girls, Eva (23) and Sophia (21) and wife to one wonderful husband, Kurt. View all posts by Anne Celano Frohna